Ian MacKay started volunteering for Book Fair in 2007, when his son entered Junior Kindergarten at RPPS.  Ian got involved in the annual book drive that takes place in the two weeks immediately preceding the Fair.  During the book drive, people call or email to schedule a time for a volunteer to stop by their house and pick up their boxes of donated books.  Book drive is usually pretty routine and not exactly dramatic work, but there was one visit where the wife was happily sending off a stack of boxes and Ian got caught in the middle when the husband appeared and demanded to have his “childhood memories” handed back to him immediately.  (In the end, the husband settled on keeping one box and allowing the rest of his treasures to be shared with Book Fair shoppers.)

After helping with the book drive for a number of years, Ian moved on to sorting and pricing during the two weeks leading up to the sale, when the gym is transformed into a giant used book store.  In 2014, in addition to helping tremendously in the lead up, he also joined the Book Bin Team.  The Book Bin Team takes turns checking the donation bin in front of the school on a daily basis, sorting and storing the books from March until October, when the gym is transformed.

When asked why Ian chooses to volunteer with Book Fair he said simply, “I love books.”  His son will be graduating from RPPS in June 2015, but Ian plans to continue volunteering, joining the many community members who support Book Fair year after year.

Treasure that got away:

The Cook Not Mad, or Rational Cookery (Canada’s first cookbook, first published in 1831 – it was a reproduction, but still!) 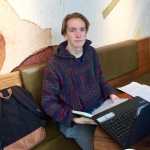